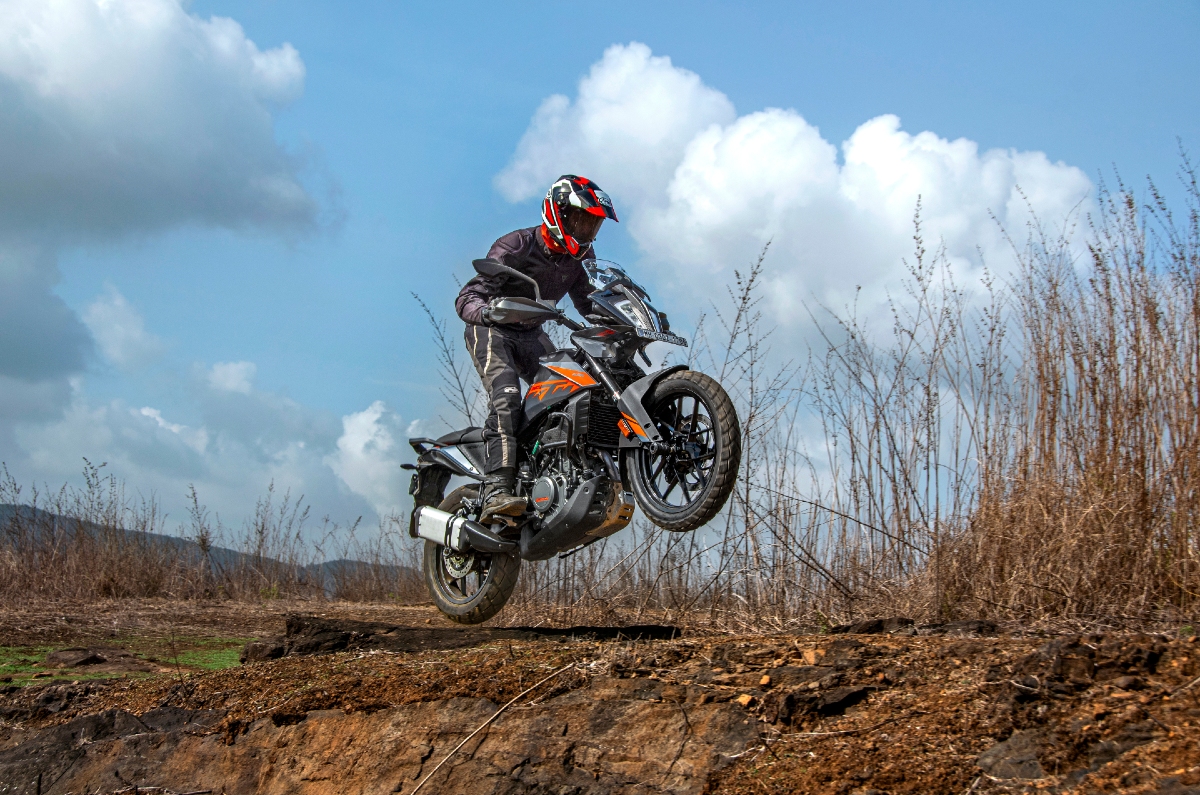 It’s been two and a half years since the 390 Adventure was launched in India, which is just another slap-in-the-face reminder of how fast time flies. For 2022, KTM has given the bike its first (albeit small) set of updates that should improve the riding experience a little, so we hopped on one to find out.

The immediate impression is that this subtle dark grey and black scheme looks really nice in person. When the images first came out, I thought I’d prefer the new Blue/Orange combination, but it’s actually this one that looks nicer to my eyes. The bike also gets a new set of alloy wheels that KTM says are both lighter and stronger than before. Visually, nothing else has changed, so you still get the quirky face and long bodywork that culminates in a sleek and handsome tail section.

The bigger changes for 2022 reside within the TFT display. The unit is still the same as before and it is large, well-laid-out and a pleasure to look at. What’s new is the inclusion of two riding modes – Road and Off-road. The primary difference between the two is that the off-road mode allows for very lenient traction control intervention, which lets the rear wheel slide quite a lot before cutting the power. This mode is nicely usable in the dirt and it will be good for less experienced riders who might find the thought of the KTM’s 43hp and 37Nm of torque a little intimidating off-road.

If you do want it all turned off, you can go into the menus and deactivate the TC, as well as the rear ABS. What’s nice now is that the TC turns back on only when you cycle the key, and not if the bike stalls or if you use the kill switch. I remember the TC cutting in randomly off road at the first ride event in 2020, even when seemingly turned off, and that was extremely frustrating. There are no such trust issues any more. For those of you wondering, the new riding modes cannot be installed in the previous models of the 390 ADV.

While Bajaj doesn’t specifically mention this anywhere, the latest bike also seems to run a little smoother and in a more refined manner than I recall. The shift action of the up-down quickshifter feels improved as well and it works quite smoothly above 5,000rpm. It’s still not very nice at low revs, but you’ll soon figure out when to use the system and when it will be better to just shift with the clutch. Either way, I found myself using the quickshifter far more than when I rode the first-gen bike, and the feature is another nice value addition, alongside the Bluetooth connectivity, cornering ABS and traction control.

Having owned a 2014 390 Duke and now a 790, the 390 ADV really comes across as the most un-KTM KTM that I have ridden. It is smooth, docile and remarkably well-behaved at city speeds without any of the jerky, rev-hunting, angry pitbull-on-a-leash behaviour I’ve known from my own KTMs. Its longer chassis and more relaxed steering geometry also means it has none of the nervous, edgy steering that you’d get from a Duke on bumpy roads.

Aside from the wide handlebar, this is a fantastic bike to commute on, with a light clutch, smooth throttle responses and no nasty heat from the engine. It’s not like it’s boring either, as there’s an enjoyable surge of power once you cross 6,000rpm. As for engine heat, sure, it can get fairly warm, but the engine temperature is kept well in check even in heavy jams, and the twin radiator fan set-up makes sure you’re never blasted with any unpleasant hot spots.

The 390 ADV can have a tendency to stall at low speeds, both in the city or off-road, but that’s easily remedied by installing a one-tooth-smaller front sprocket from the 250 KTMs. It costs a few hundred rupees and vastly improves the low-speed tractability and in-gear acceleration, without making a serious dent in the top speed – you can still cross 160kph sitting upright without too much effort. Having experienced this mod, I can say with confidence that it is the most rewarding, bang-for-buck upgrade you can make, especially in our riding environment. Before going ahead with the mod, it might be wise to talk to you dealer about any warranty implications, though.

On the highway, 100kph is absolutely effortless and you can also hold onto 120-130kph without working too hard. On the other hand, I liked how the bike encourages calm, docile riding, as you can stick it in fifth gear at 50kph and enjoy a mellow ride while taking in the scenery around you. Again, how un-KTM!

The suspension is the same, which means we still don’t get the international-spec, adjustable suspension and the set-up too is on the firm side. It’s still a nicely comfortable motorcycle, with very spacious seating and comfy ergos, but big bumps and nasty expansion gaps will give your back a whack.

Slowing the bike down in a hurry requires more effort at the front brake lever than I’d like, which is probably down to the fact that the ADV uses the organic brake pads from the smaller KTMs, unlike the sintered pads that come on the 390 Duke and RC.

Off-road, things remain much the same. The bike has a decent level of capability with about 180mm of suspension travel and 200mm of ground clearance, but it’s not particularly easy or natural feeling. The handlebar is too low, the foot pegs are tilted forward, and the firm suspension means the bike bounces more than it absorbs. With better ergonomics and improved suspension, this bike could be quite a lot of fun. But as things stand, it’s not something you buy if off-road riding is the main intention, unless you plan to throw some money at upgrades.

I really enjoyed my time with the 2022 390 Adventure. It is disappointing as an off-road-focused ADV, but it makes for a fantastic do-it-all motorcycle. The bike’s relatively mellow character may be a downer for KTM fans, but that makes it a whole lot more appealing to a bigger audience, and a more practical thing to own. While the tall 855mm seat will be a turn-off for short folks, this is probably the best option for bigger, taller riders looking for something under Rs 4 lakh.

The price has gone up by around Rs 6,000 for the 2022 model, and at Rs 3.35 lakh (ex-showroom, Delhi), it is undoubtedly an expensive motorcycle. On the other hand, it’s an excellent all-rounder and makes you feel special – both of which make this an easy bike to recommend to anyone who doesn’t place off-roading as a high priority.

This is a autogenerated feed from https://www.autocarindia.com/bike-reviews/2022-ktm-390-adventure-review-the-all-rounder-424851#utm_source=feed&utm_medium=rss&utm_campaign=Autocar+India+Bike+First+Drives+feed & Bull-LEDs do not have any ownership of the content.